It’s not easy, to consider every little detail about a character from the very beginning, that much I’m sure anyone who has attempted writing a story would agree with that. But occasionally you run across a moral dilemma, that’s less of a dilemma and more “do I let the character do what I expect them to do, or do I have them do what’s expected of them”?

For instance, I expect Lawrence Fishburne to only offer me the truth, nothing more.

As I belt away at my story having completed my literature review, I had experienced this very engagement as I work around the climax of the story. To elaborate at this point, the main character finds the artifact that virtually everyone had been trying to get their hands on for the entire book (and then some). His enemies want it, his companion wants it, and he wants nothing to do with it…..at least he initially thought. However, he slowly begins to witness the impact this artifact could have on society if it’s left in the hands of the enemies, and not the gods who created it. Naturally, he resolves to give it back to the gods……until he finds out that there’s an ancient conspiracy going on with them, and suddenly the villain doesn’t seem so villainous for opposing them. Huh.

And I wish it didn’t take 10 straight minutes for the Matrix Reloaded to recognize this.

But this is where I believe most writing soon becomes organic, depending on the type on the conflict at play. There is an inherent loss I feel, in making a plot revolve around a character acting a certain way. Cause let’s be real, people are people and will make impulsive decisions and regret it immensely. That’s just how life goes at times. I considered that my main character, while not a selfish individual by any means, would rather keep himself out of as much conflict as possible, regardless of the repercussions. That’s not a fatal character flaw, or even a negative trait. It’s simply how I believe the character would respond to a situation, and that makes the story almost as much of a surprise to me as I feel it will a reader, even though I’m the one writing it.

I have an idea of how my story will end, but it’s not necessarily up to me to decide it. Sure, I’m the one writing it and have the most creative control as a result, but the interactions of my characters, including their thoughts and feelings throughout the story, are ultimately the biggest factors behind the things they do, and whether it’s in the name of the right thing, or the freedom of choice, it’s the conflict that’s what makes people keep reading. 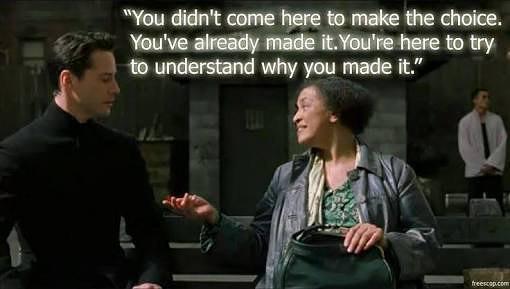 Wouldn’t be much of a writer if I couldn’t.

View all posts by Justin G.